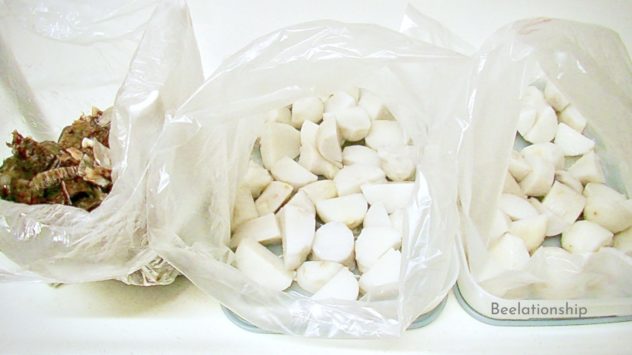 Two bags of Japanese Taro(Satoimo) are peeled and ready to be frozen!
This is the home-cooking version of preparation so that a professional chef would do in another way and the  size of the pieces might be larger.

Lately Hachi became uptight and her mind was messy, and felt like she was catching a cold so that she tried to sleep as much as she needed.

While she was taking care of herself, two bags of Japanese Taro, called Satoimo, were waiting for her to be peeled.

Satoimo is a root vegetable like a potato, looks like a tiny coconut and often sold with soil. 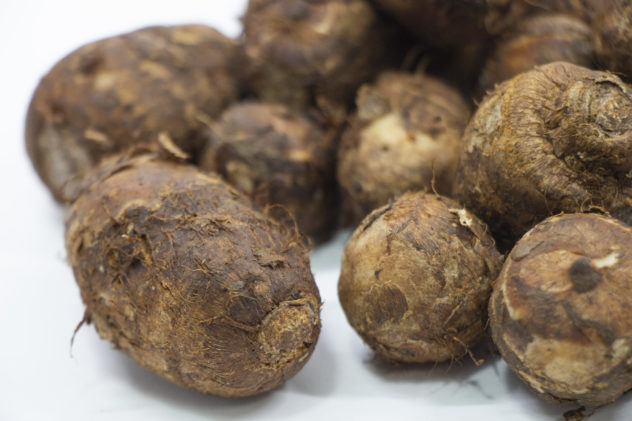 Photo by HiC. 写真AC
Satoimo might not seems to be gorgeous in the produce section but it is so tasty!

Hachi often prepares a few bags of Satoimo at once and kept them in the freezer after she makes shallow cross cuts in the surface of them, put them into hot boiled water and peels them with cold running water.

Satoimo which is peeled at a factory is sold at a supermarket (it is helpful and she uses it sometimes), but stickiness and creaminess are totally different from one peeled by hand. (Hachi does not know what the difference is.)

Therefore, a dish of satoimo peeled by hand becomes kind of a gorgeous meal at home, which gives her a feeling that the end of the year is coming.

It took time to finish peeling and was a little bit challenging while she felt like she was catching a cold, but the whole process helped to let her mind empty just for a moment.

While Hachi was peeling Satoimoes, she was looking back last nine months, and found unaddressed sensations.

(Honestly, she is in the midst of the work. Those are the slight feelings which are easily gone when she tries to remember. She thought it took more time for self-reflection to be verbalized but an unexpected help supported her. She will write about it later.)

First, it is about heavy, sticky and oily feelings of anger to unfairness which have been piled up.

Hachi is angry at the policy of Japanese government for COVID-19.

It seems to have been unfair. Its decision is always late especially when it comes to social welfare, and the stickiness of the government to the policy of letting people moving around seemed to be crazy in the worst situation like now. The way of thinking discourages people who are suffering the most.

However, those types of things could have been done before and it was just that Hachi did not realize at that time.

Also she already expressed what she felt, and there seems to be no meaning of repeating the same things.

She is not trying to be a nice person but she feels confusion of the government is in the air as well. Then, if so, it needs to decide what to do by itself (of course, confusion cannot be excuse to delay the decision in this situation) because it is not the purpose that one viewpoint controls the other.

A clenched hand cannot be opened by others; it has to be loosened by itself.
(Or, maybe, it/we can keep clenching a thing or a matter until it becomes something unique. It depends upon the situation.)

However, waiting needs tolerance, trying not to see the latest news so much, trying to do what she needs to do and preparing for the next phase.

Anger itself is not good for a body but suppressing anger is much worse.

The vicious circle discourages Hachi’s mental power to find a new angle, and she did not what to do with that.

Second, Hachi lately thinks of Ruth Bader Ginsburg and Martin D. Ginsburg, and has a fantasy of the habit of photography and walking around with a camera when she woke up (then forgot).

Hachi slightly realized that Beelationship is often moved by something public.

Beelationship is not a character which gains energy by having attention: thinking quietly, watching movies and documentaries, or exchanging insights are the source of energy.

At the same time, lately Hachi often remembered that some leaders struggled to balance between work and family life.

She had no idea why it could happen, but last nine months when Hachi’s focus was on social issues were enough to get a hunch.

Her bucket list includes “having enough time to water the garden”, “having time for cooking” and “having time to look people around her”.

Those are not activities which need to be done once but the foundation for her life which requires continuous work.

Also Ruth Bader Ginsburg seemed to be good at adapting to the changes of the stages of personal and family life.

What is her/their viewpoint toward life?

Why is the fantasy of photography and walking around with a camera?

Third, it is about difficulty of how to deal with the phase of role switching.

Hachi accepts an idea that things are flowing and might have phases: Everything is happy is the first phase. Conflict is the second phase. Trying to see from the other viewpoint is the third phase. Having the feeling to be able to see things clearly without any efforts is the fourth phase.

She feels that the third phase requires tolerance in unconformity because we are often confused, do not know where to go and do not know from where which opportunities will come to shift a viewpoint.

Right now Hachi is in the uncomfortable phase of role switching and hopefully she could complete it, taking the situation as it is and being open to new possibilities, not to go back to the phase of conflict or shift to the next phase with superficial understandings. (She often skips the phase so quickly and roughly.)

What kind of Music helped?

Hachi felt she needed to make a quick response about self-reflection so that she tried to watch a documentary of huge trees, remember Mt.Kaimondake or organize a pantry to make her mind clear out, but those activities did not work this time.

Hachi happened to heard one-hour music in a festival.

(The interesting thing was that she was singing Santa Lucia the other day while she was vacuuming, wondering why she was feeling like doing so. She could sing it in Italian because of the exam of music in her junior high school…! We don’t know what will move us many years later.)

She could not understand the language at all and did not know much about the festival(Luciamorgon?), which might work well, and the high-pitched sound really helped to resolve noise and dirt in her mind.

The high-pitched tone reminded her of the service at St.Paul Cathedral.

Hachi is not a Christian but likes visiting churches in the meaning of making her mind calm and clear out.

The atmosphere of churches in Europe often makes her energy open to the sky.

The atmosphere of temples or shrines in Japan often makes her energy being grounded.

Now she might needed to open her energy up to the sky.

While she was listening to the music, she remembered the song of “Stronger Together” by Military Wives Choir in the U.K., which lyrics says that “Can you hear above the noise, the voices?”

Also she remembered she was humming the melody of the soundtrack of Historical Drama about Meiji Restoration in Japan and mainly Kagoshima Prefecture the other day (it starts from 1:45 of the movie. Okinawa Island melody applied to the song and sung in Okinawa dialect so that Hachi cannot understand the lyrics easily. The same melody is heard from 0:51 of the movie).

The interesting thing was that Hachi could see the political situation straight while she was listening to the high-pitched sound; the politics in the historical drama about Meiji restoration and the background melody, the policies at present about COVID-19 and music in the festival.

She hopes this makes sense at least a little bit.

Following inner events gives her a hunch that the phase of switching roles is uncomfortable but might include many possibilities if those are carefully unfolded.

Hopefully, those images and fantasies became creamy and sticky in a positive way in the future.

Health is the foundation of work

She overworked and did not know when to stop to have lunch, which was crazy. (…Hmm? someone was saying the same thing to something, wasn’t she?)

When she had lunch properly, her body became warm (she is so ashamed to say so….). If she had lunch on time, she might not feel like she was catching a cold.

Yes, taking care of a body and health is the foundation of work.

As keeping that in her mind, Hachi will complete the phase she is in.

It is going to be so chilly almost anywhere in Japan this week.

In 2020, the unexpected thing happened and we focus on the foundation of everyday life.

The range of people to share the foundation of everyday life might be going to be more important according to a research.

However, the force change may bring richer life to us.

Hopefully, we can find a life style in which we can adapt to situations rain or shine.

Wherever you are on this planet, please do take care of yourself and have lovely holidays…!