Have you ever heard the song of “ECHO”, which was the theme song of 2019 Rugby World Cup?

Hachi remembered the song when she realized she was alive in the morning after anaphylactic shock in the night.

Hachi suffered from anaphylactic shock recently, and she is on the way to recovery.

(Even though she does not know whether there is a causal relationship between Pfizer’s vaccine and ‘sleeping in the same room with a person who got vaccinated for a week’, she keeps writing down what happened to her:
she faced abnormal uterine bleeding (which never happened before), hives, small red dots on her skin same as the person who got vaccinated, and slight pain on her side (which reminded her of shingles).
Then, she had difficulty in breathing for the first time in her life, and she felt her mobile phone was too heavy to hold so that she went to see a doctor.
(Honestly speaking, writing this part is scary in the mood of “vaccine is a perfect solution”.))

We have to see a doctor when we have symptoms.

She remembered she felt as if her chest was pushed when she had difficulty in breathing.

At that time, she had hopeless feelings toward the Tokyo Olympics and some of the organizers’ attitude.

She felt miserable because it could happen to spread new coronavirus variants everywhere in Japan after the games, and no one in authority position would take responsibility for that.

She also wondered a lot why authorities never see small cracks which had to be avoided from the viewpoint of risk management, nor listen to people.

Therefore, she was about to give up to speak, having miserable feelings. (She wondered that feelings of people in Fukushima or Okinawa were like that.)

While she could hardly breathe, (she is a little bit shy about saying this….but..) she asked “a god” not to kill her.
If “a god” won’t kill her, she promised to write what was on her mind (in Japanese) about the Tokyo Olympics.

She knows that some of you might think “what does she talking about?”.

The point is that she tried not to suppress her own feelings any more even if all she could do was just keeping speaking and the voices would be ignored.

Before we move on to the topic of the song of “ECHO”, Hachi would like to pick up the painting of “Echo and Narcissus”.

(She is a little bit scared to do so, and sorry for picking it up again….. However, she will do it with her awareness this time.) 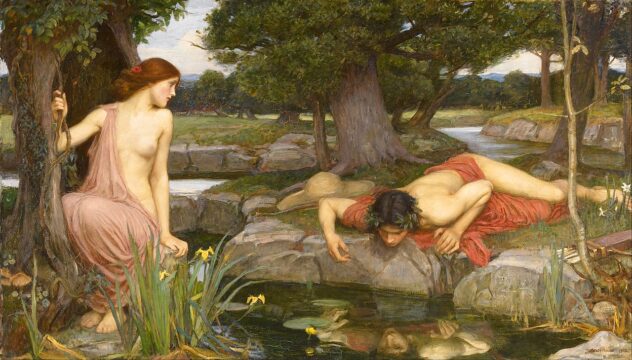 People who are good at taking care of other people tend to echo (carefully listen to other person and repeat what he/she said), forgetting their personal needs or wills.

When she remembered the painting several years ago, Hachi’s focus was on “Echo”.

Now, she focuses on “Narcissus”.

A person who is good at taking care of other people sometimes needs to pull all his/her energies into him/her, forgetting others, then, express it fully at least just for a moment.

That could be challenging for him/her.

The song of “ECHO”

Now let’s listen to the song of “ECHO“.

What did you find from it?

For Hachi, the song somehow helped her to remember the connection between symptoms and transformation.

She used to suffer from shingles, which forced her to end working five days a week and moving around to find something interesting for two days.
Instead, she had to work on improving the second language and, as a result, getting other structures of thinking.
That became the very foundation of her life. (However, thank you for reading her articles patiently…! She often makes a lot of mistakes..!)

Hives forced her to choose which way of psychology she would learn.
Hives often cause heat.
Hachi had to learn how to deal with heat from hives, and internal heat as well, especially in the meaning of expressing herself.
It was because she often felt she was a minority and believed that she had to hide her energy for a long time.

This time, hives, a hunch of shingles and anaphylactic shock attacked her at the same time…what will happen this time…?

The dream of Hanafuda tapestry

In the lyrics of the song, we can hear “One for all, All for one”.

Peiji loves the phrase. (She also loves “The Three Musketeers”.)

When Ito got depressed, Peiji often talked about the phrase to Hachi.

It was just before Beelationship was born.

If we could be proud of ourselves, the reason might be the uncertain confidence which we can find unusual but sustainable answers to the challenges to the unknown.

Hachi herself also likes the spirit of “One for all, All for one”.

It reminded her of the days in high school as a manager of baseball club so vividly.

…Oh, by the way, Hachi remembered the dream she had lately, just before anaphylactic shock:

Hanafuda tapestry, which Ito embroidered, was tearing apart by a man who pretended a nice person and came closer to Hachi.

Torn nine pieces of embroidered works were tied by only a thread each other so that the tapestry became like a mobile.

It was fluttering in the wind.

(Hachi was angry in the dream, of course. However, it might imply some things: the system of hierarchy is over? or something else?) 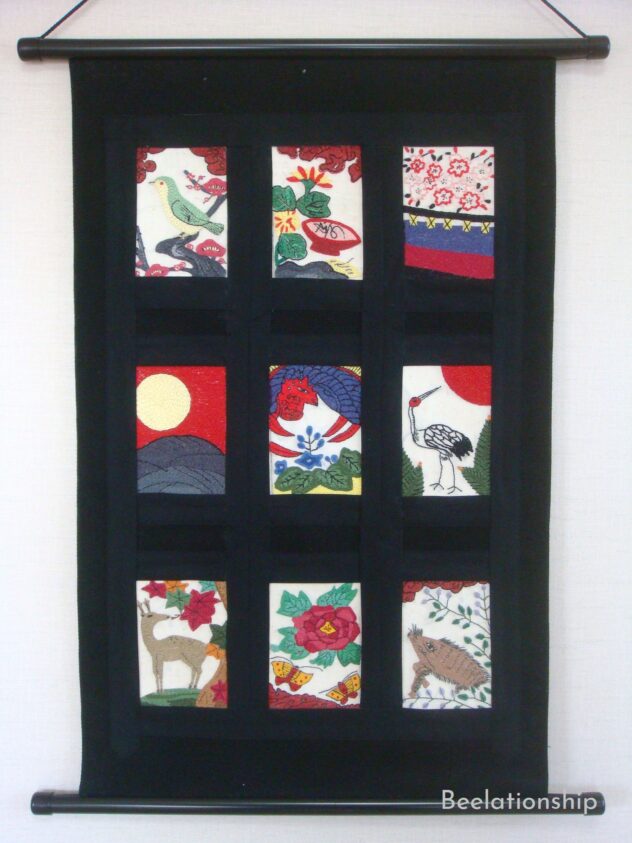 Hanafuda tapestry became like a mobile which was fluttering in the wind.

Heat and Transformation as Red and Black?

She had to choose red one, and its case is black.

That made her depressed for a second because she basically liked green and she hoped iPhone would be black.

However, red parts which can be seen from the holes of the black case remind her that she has something to express and those are waiting for her, which makes her feel a little bit great. (Yay!)

She hopes to welcome the moment, hopefully with you.

Pour out your love on yourself or what you do

Hachi reflected on the fact she did not keep updating the medical emergency knowledge about her symptoms, information about vaccine and how to prevent new coronavirus variants.

Keeping busy might overlook the most important element of our lives, health.

If health is wealth, we need to search and keep updating the knowledge first, and put the knowledge into practice or everyday life more.

It is because she experienced whole process of anaphylactic shock went so fast, which was beyond her expectation.

So said to be coronavirus.

(New coronavirus variants could require well-ventilated area more than ever.
A public survey showed that half of Japanese people might not choose to get vaccinated because of the history of harmful side effects of medicine in Japan.
That made Hachi relieved a little bit because she might not be a minority, but she still has to think what kind of environment would be great for her and for other people.)

That is what anaphylactic shock taught her.

Therefore, she would enjoy watching movies or documentaries for a while, remembering the days she could do nothing but laying down alone.

Then, she would definitely remember people who can make other people feel closer together and reminds them of ‘you are not alone’ even when we are alone or online.

That is what some people taught her in unusual and fantastic ways.