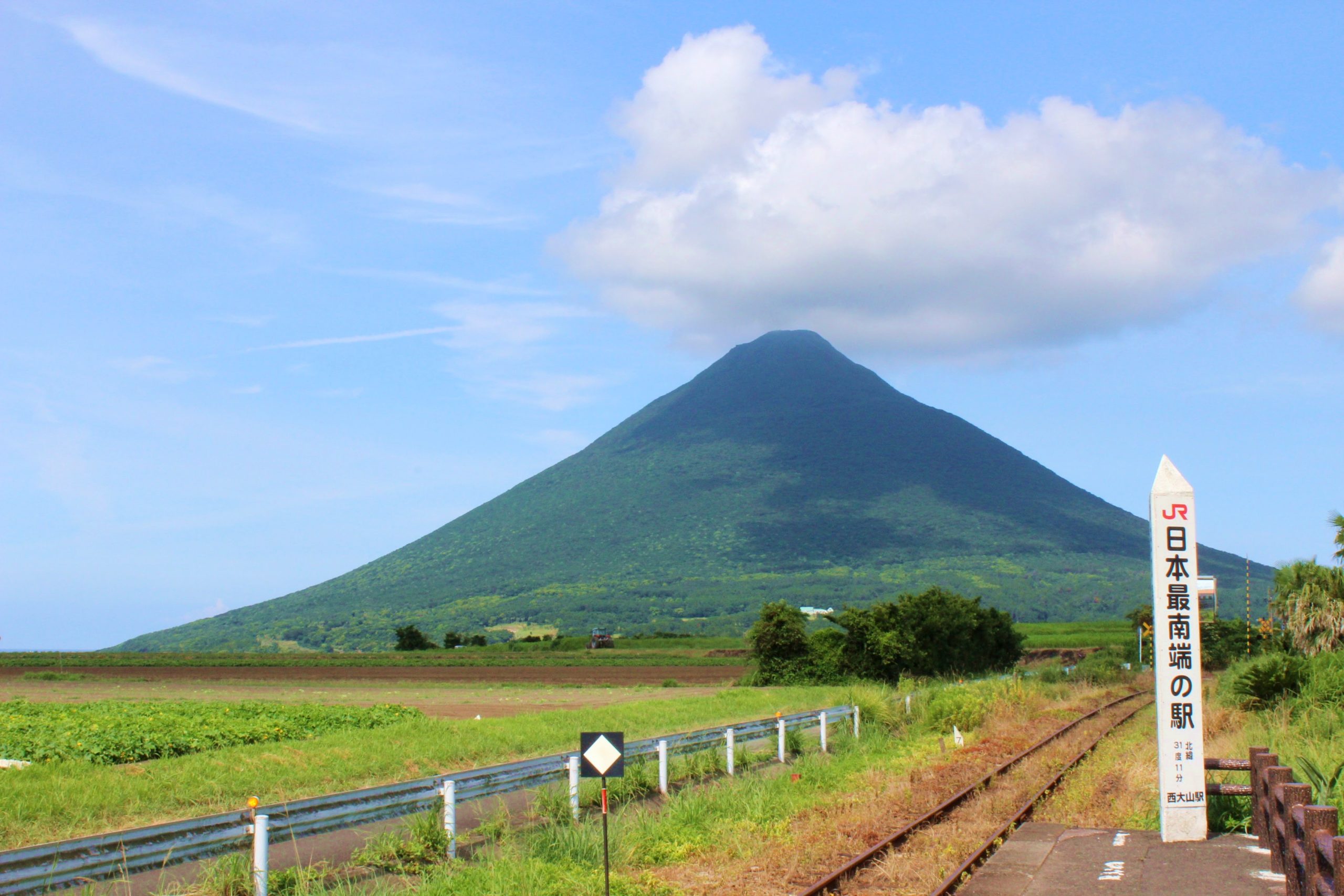 Photo by kawa7. 写真AC
Hachi once visited there but forgot to take a picture of it beautifully, watching it for a long time…!

When Hachi got exhausted, she closed her eyes and remembered Mt. Kaimondake in Kagoshima.

The scenery was surrounded by nature, out of human mind and system.

Hachi often feels like saying hello to it loudly (in her mind), if nobody looks at her (even in the imaginary world😝) because she is rather introvert.

Mt. Kaimondake seems to represent a sense of stillness and detachment, accepting whatever happened, yet, still charming.

Yes, it might be someone(?) who takes Hachi to a balcony to listen to her heart calmly and safely, and see a big picture.

What is it like to be with someone who helps inner work at home? (←she is still in the imaginary world.)

Hard? Great? Maybe is it enough to work on with a colleague?

Hachi doesn’t know what it will be like, can’t even imagine which image she hopes (Perhaps it will happen).

Isn’t it hard to express the deepest self continuously?

Expressing the very deepest self requires lots and lots of mental energy, and the soul becomes exhausted for a while.

Hachi feels it happens because it needs to happen.

She is a little bit scared to do so in Japan. (why? Leadership issue? Men’s viewpoint of preference? or just her introverted nature? )

She often say to it “done with today’s work…!” in Kagoshima dialect loudly, and Mt.Kaimondake often listens to it smiling (in her imaginary world).

It is beautiful and charming, isn’t it?😊

Hachi would like to go further a little bit about what she felt over Mt.Kaimondake.

Mt.Kaimondake is located in the very southern area of Kagoshima Prefecture, and it witnessed teenage pilots of Japanese Special Attack Units heading to their death 75 years ago.

However, Hachi could not mention that in English above a few months ago.

It was because that was the part of The battle of Okinawa and World War II, which was begun by the Attack on Pearl Harbor, and she was scared to imagine that some of you might have relatives who were attacked by Japanese military forces.

Therefore, she started to understand more about what Japanese military forces did in the other countries before and during World War II, including the Attack on Pearl Harbor, in China and so on.

What helped Hachi to work on the spacespirit between Kagoshima and Okinawa?

While Hachi looked into the details of each battles or attacks, the condition of her body became weird.

She could hear her fast heartbeats all day.

She basically needs 8 to 12 hours sleep to think clearly, but she could sleep 4 hours for a few weeks, having a dream of the civilian victims, yet she did not feel sleepy at all.

She usually drinks a cup of coffee after lunch, but it became too strong and she needed only cups of mild and sweet tea.

She thought the condition might cause a heart attack or other symptoms, so that she stopped to work on it.

Then, unexpected things happened; some related local documentaries were aired on television luckily.

That helped her to see the overview of the spacespirit.

She slowly realized that her weird physical condition might be in the same direction of commanders and soldiers during the war, and sensed that people in the crazy condition could not make a clear decision.

As Hachi experienced the unexpected things, she feels very roughly that the media can be a place to hold open forums (for the pandemic as well.)

In addition to the possible aspect of the media, she also feels that an atmosphere or “real” voices can be found through the media if her/your somatic feelings is alive to stay in present.

That might be connected with the idea of nonlocality.

However, at the same time, we need to be careful about propaganda through the media (lately fake news as well).

Sometimes the power of media or digital matters are so powerful to influence people, so that the balance between tuning in information through the media and staying away from it is important in order that somatic feelings come first.

The reason Hachi has been feeling something magnetic in the area between Kagoshima and Okinawa might connected with the experience at Chiran Peace Museum.

Chiran Peace Museum is located in the southern area of Kagoshima prefecture, and it is near Mt. Kiamondake. 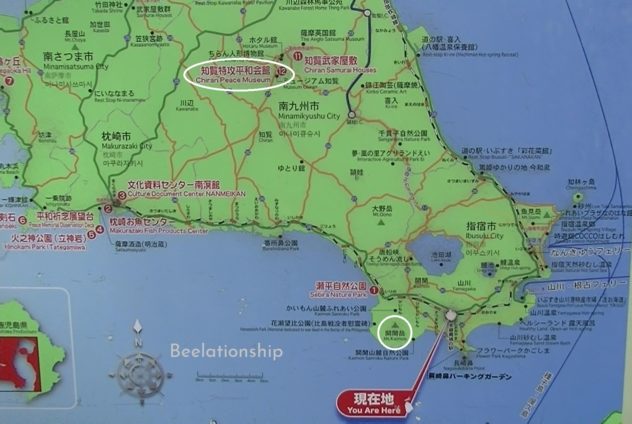 Hachi took the picture of the map at the southernmost train station of Japan Railways, Nishi-Ōyama station, and Mt.Kaimondake located near the station.
No.12 above in the white circle is the location of Chiran Peace Museum.

Sorry for the unorganized video(howling wind sound and the explanation in Japanese only).
Hachi took a short video of the map at the southernmost train station of Japan Railways, Nishi-Ōyama station, where located near Mt. Kaimondake, after visiting Chiran Peace Museum.
Hope you to feel being there a little bit.
(She is not good at reading maps, and sometimes gets lost….😅 )

In the museum, last letters from teenage pilots of Japanese Special Attack Units to their family were exhibited.

At the end of the exhibition, there was the real Japanese fighter.

When Hachi was walking around it and watching its burned surface, the right wing was the same height as her right arm.

Then, she suddenly felt as if the right wing of the fighter was hot and it burned her right arm in a belt shape. (Of course, she did not touch the exhibition fighter. She is still wondering the experience.)

That made her stopped in front of the fighter for a while, and made her think “if I was a mother of a teenage pilot, I would think I did not gave birth to him to be dead like this with a fighter…… I would be mad….”

She did remember what she was thinking but totally forgot the imaginary burn.

A few years later, when she heard an action about a national policy, the imaginary burn ached as if the salt was put on it, which made her surprised as well.

(Visual channel is not sensitive.

Movement channel is not. She basically prefers stillness. If she dances, it is only when she becomes exhausted too much at midnight.

Auditory channel can be sensitive.

When she perceived something via somatic feeling channel, it takes time to formulate what she felt, and need time to start to talk about it. Sometimes a few years.

Being authentic means, for her, keeping finding the very center(core) of her somatic feeling.

In order to do so, she tries to remove “not this one” of words, thoughts or actions about important matters. It might be similar to the idea of not-doing.

(Maybe creating a quiet environment and having certain amount of time are ones of the hardest tasks.)

Then, when the swing of thinking stopped, she waits whether somatic feeling is moved again; It is like a harp string being flicked.

She acts out only when her somatic feeling is moved (about important matters).

In the turbulence moment, the existence of a family in the broader meaning becomes more meaningful.

Each member of a family has a right and needs to express his/her feelings and thoughts by him/herself.

However, sometimes there is a moment when it is hard to do so.

Then, being understood with little expression is what he/she needs the most unconsciously.

It is a hard thing to be done, but if that could be happened some times, they might begin to be a family because that requires continuous, good/deep quality of interaction.

Whenever she saw your favorite earth spot, she felt that something extra was dissolved naturally, and felt as if she was supported to find what to express.