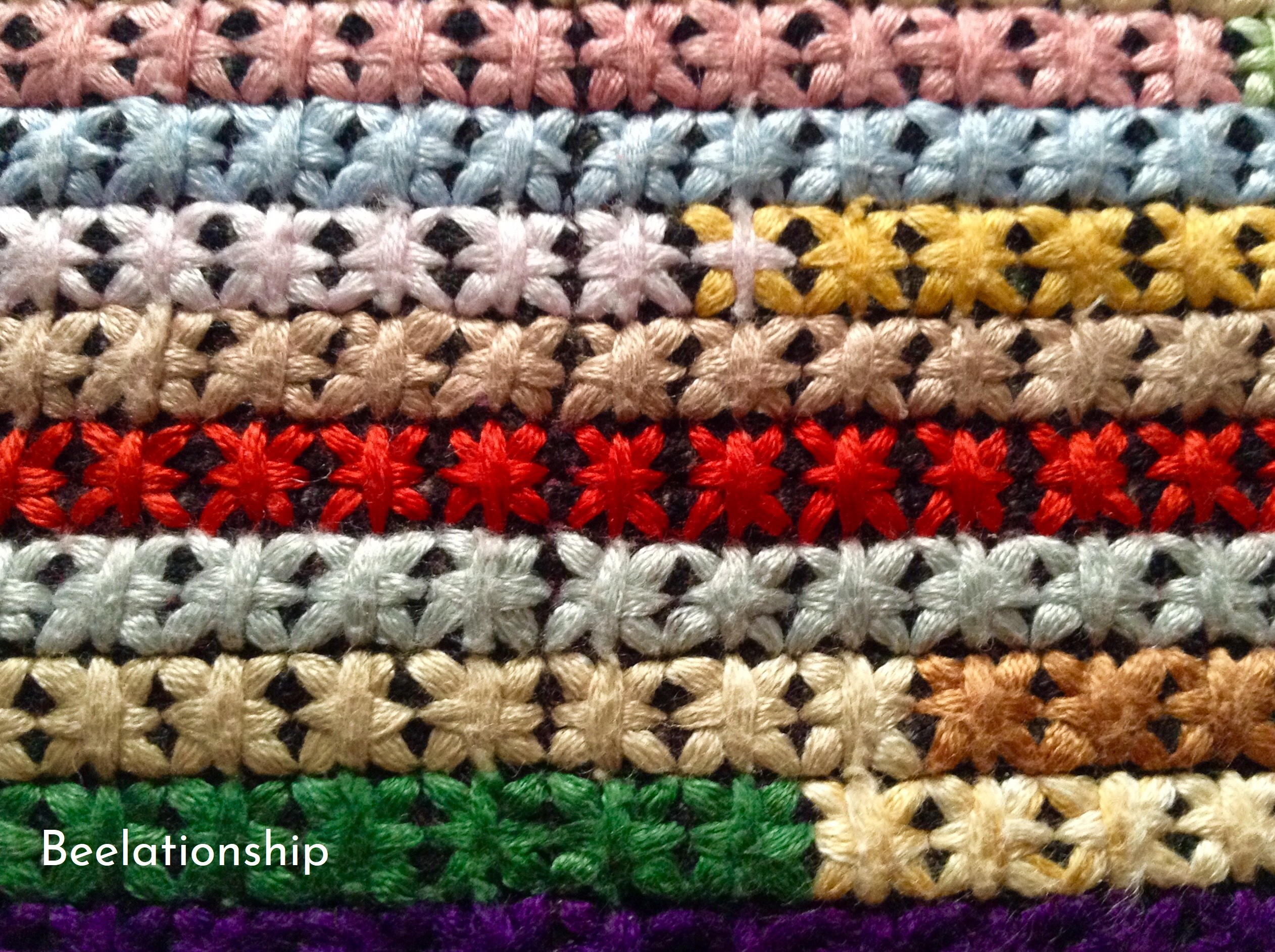 Colorful Mat needs to be repaired

One day in November, 2018, Hachi felt something different on Colorful Mat.

Can you see what it was and where? 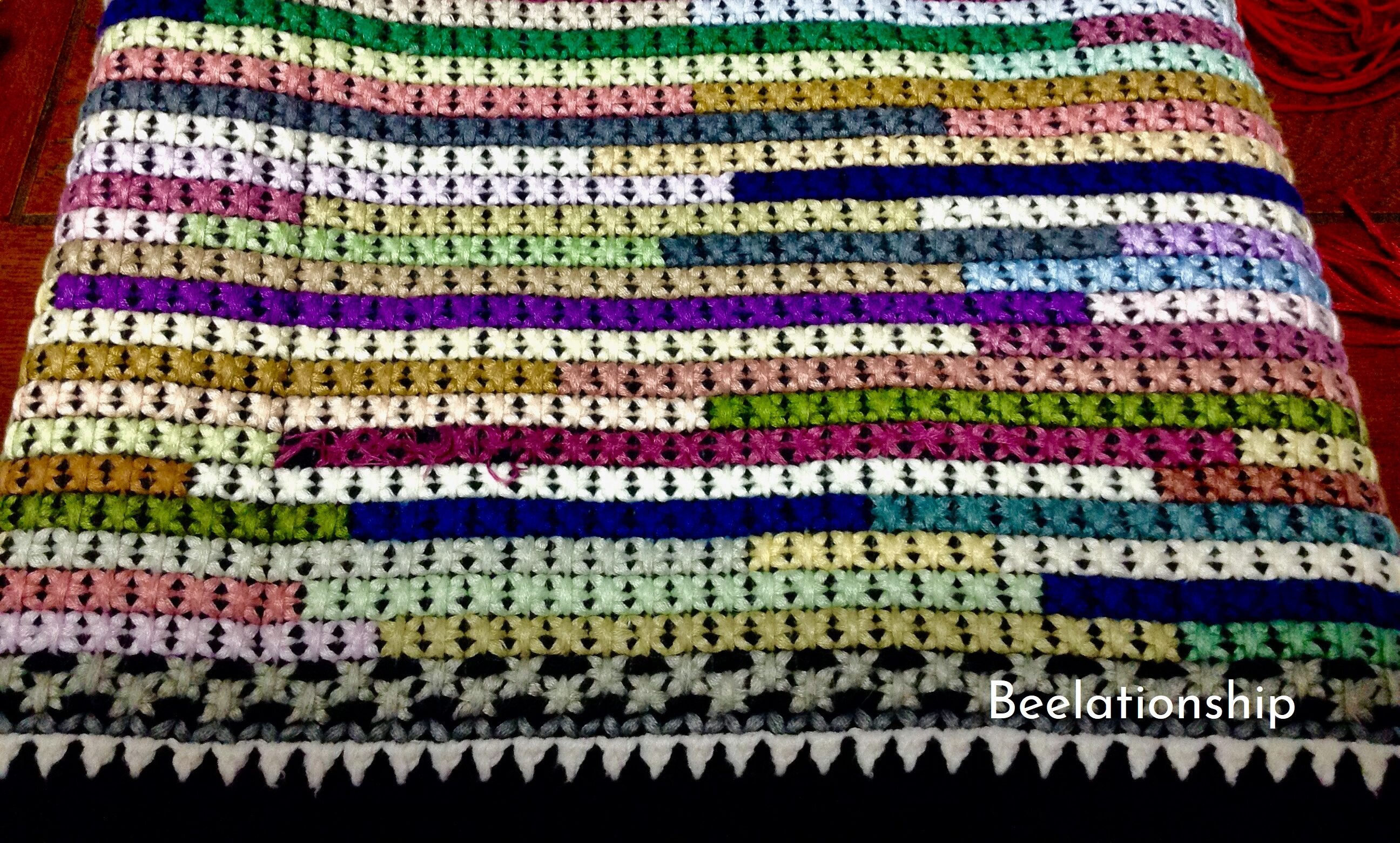 “Um? Something different on Colorful Mat…”

The answer is sweet-potato-colored part in the middle of the photo.

Floss was wearing out…! 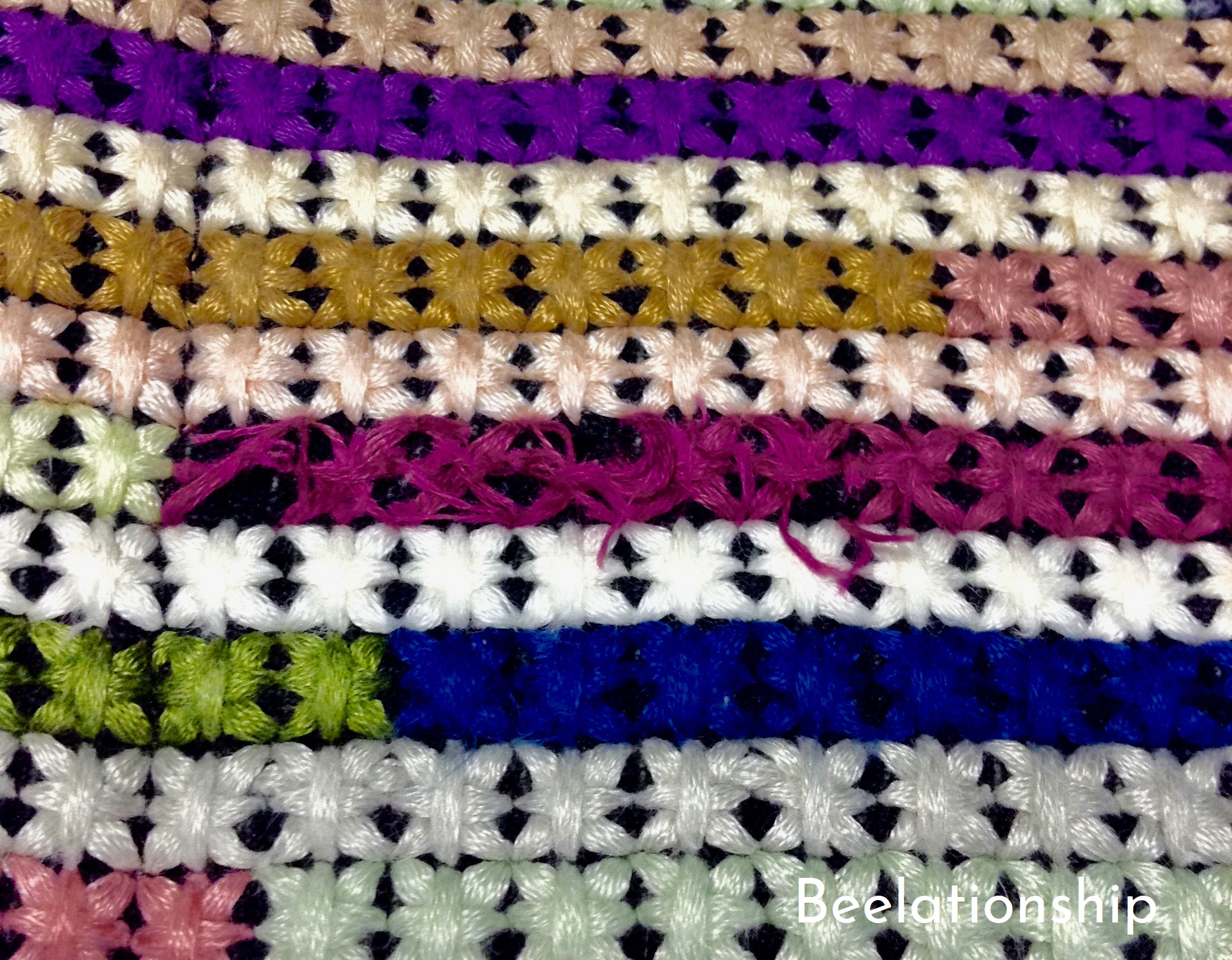 When Hachi looked at the colorful mat closely, she found that floss was wearing out in a few sweet-potato-colored part.

If she ignored the condition, floss was going to be worn more and more.

There is a saying “a stitch in time saves nine”.

So, let’s repair it immediately and save time to be concerned about the parts.

Honestly speaking, Hachi was a little bit scared of repairing other person’s work.

She hoped to succeed in repairing it and making it better, not destroying its original atmosphere.

In order to achieve that, the first important task was choosing floss colors.

Hachi was not good at selecting colors so that she asked Ito, who was the creator of Colorful Mat and loved discovering new combinations of colors.

Ito selected colors below, which were in the same color system but brighter than sweet potato color. 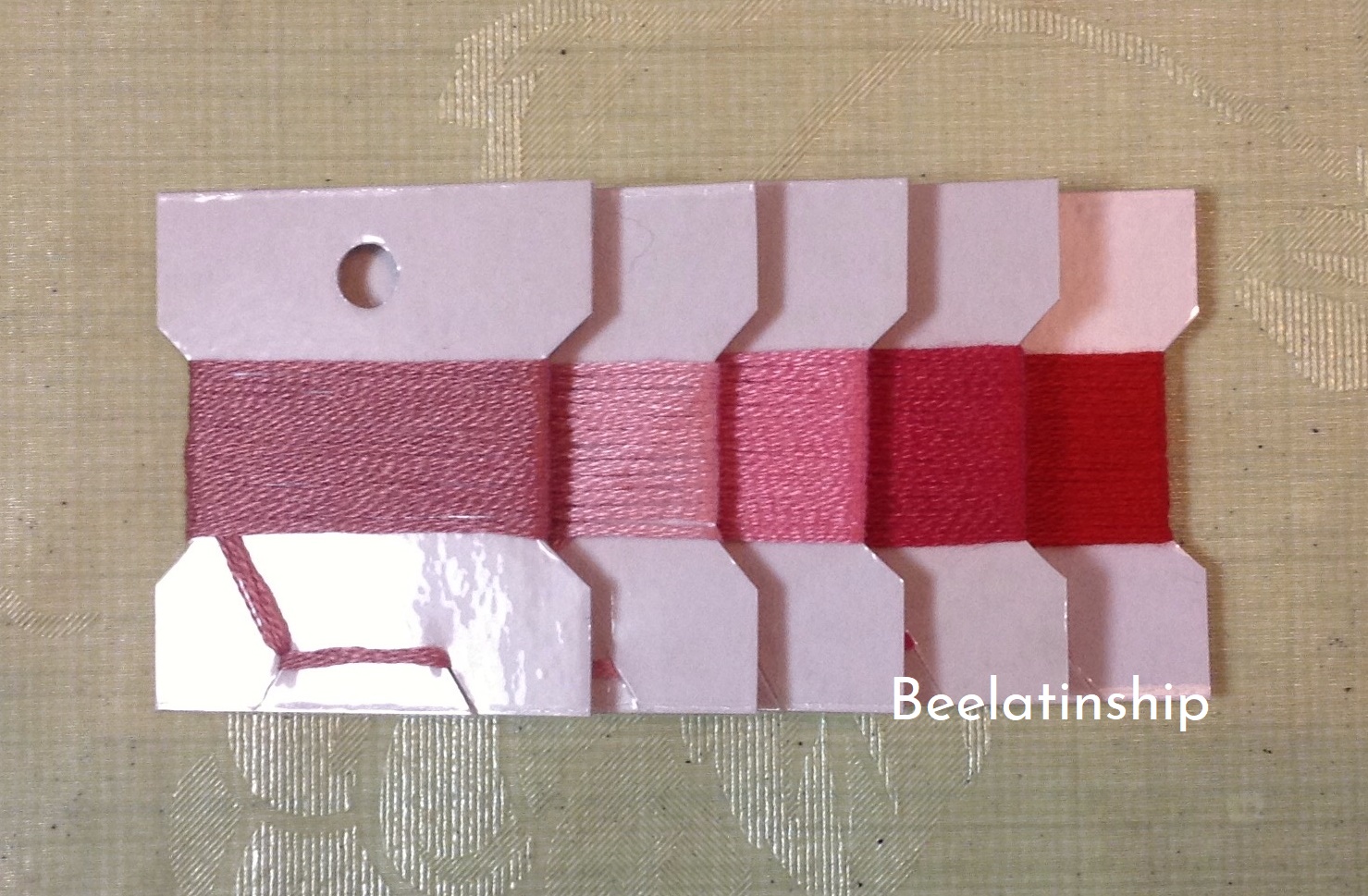 These colors are the ones Ito often uses for her embroidery work.
(By the way, Ito loooves sweet potato.)
Pink colors remind Hachi of strawberry milk she liked in her high school, and red colors made her heart pounding because they seemed to represent opposite energy of her ordinary nature.

She had a hunch that those colors would add a brighter and slight punchy atmosphere to the mat.

Actually, the step took more time than stitching because floss were often split and intertwined complicatedly.

Therefore, she needed to be patient to remove all the worn-out floss. 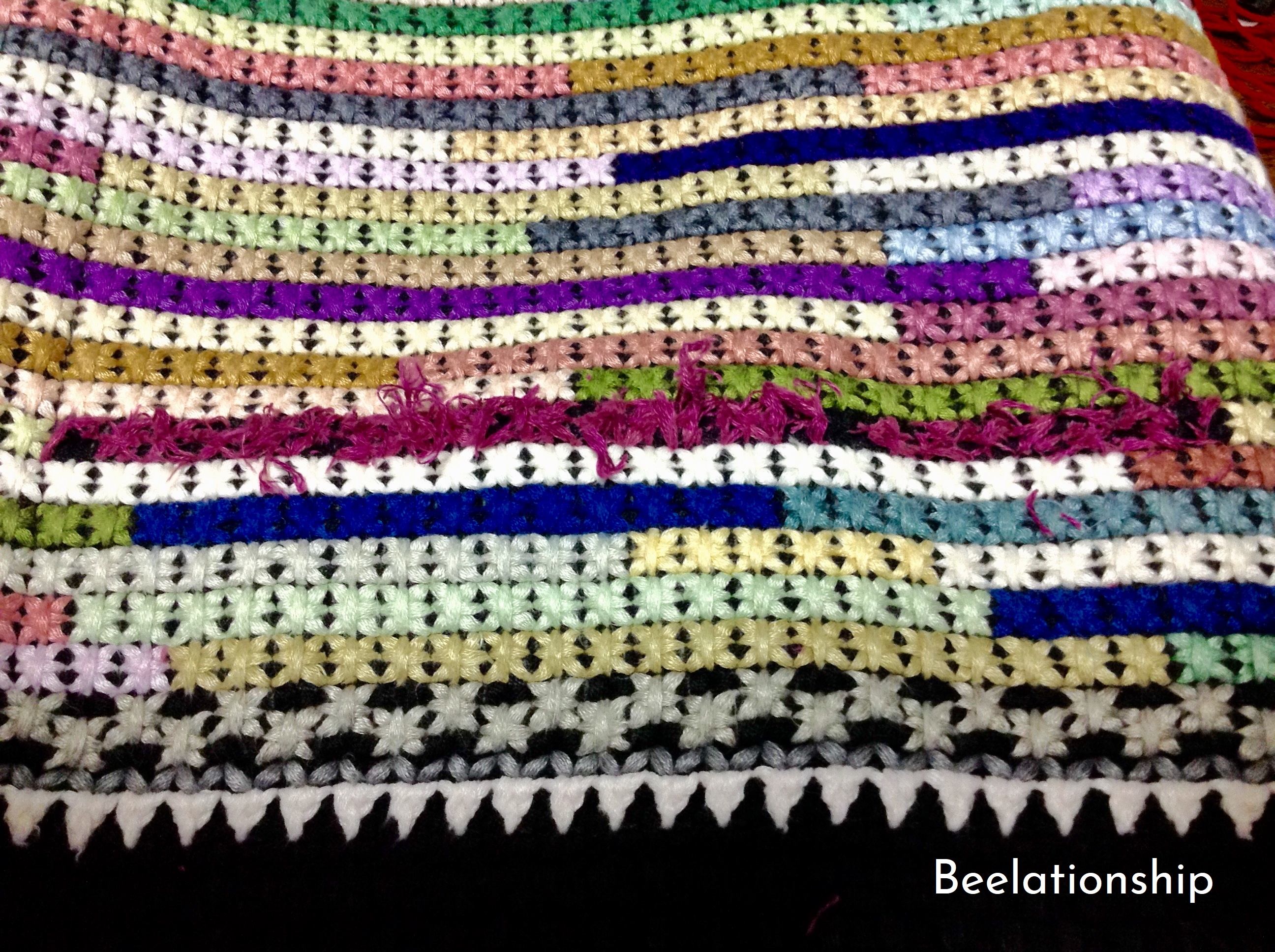 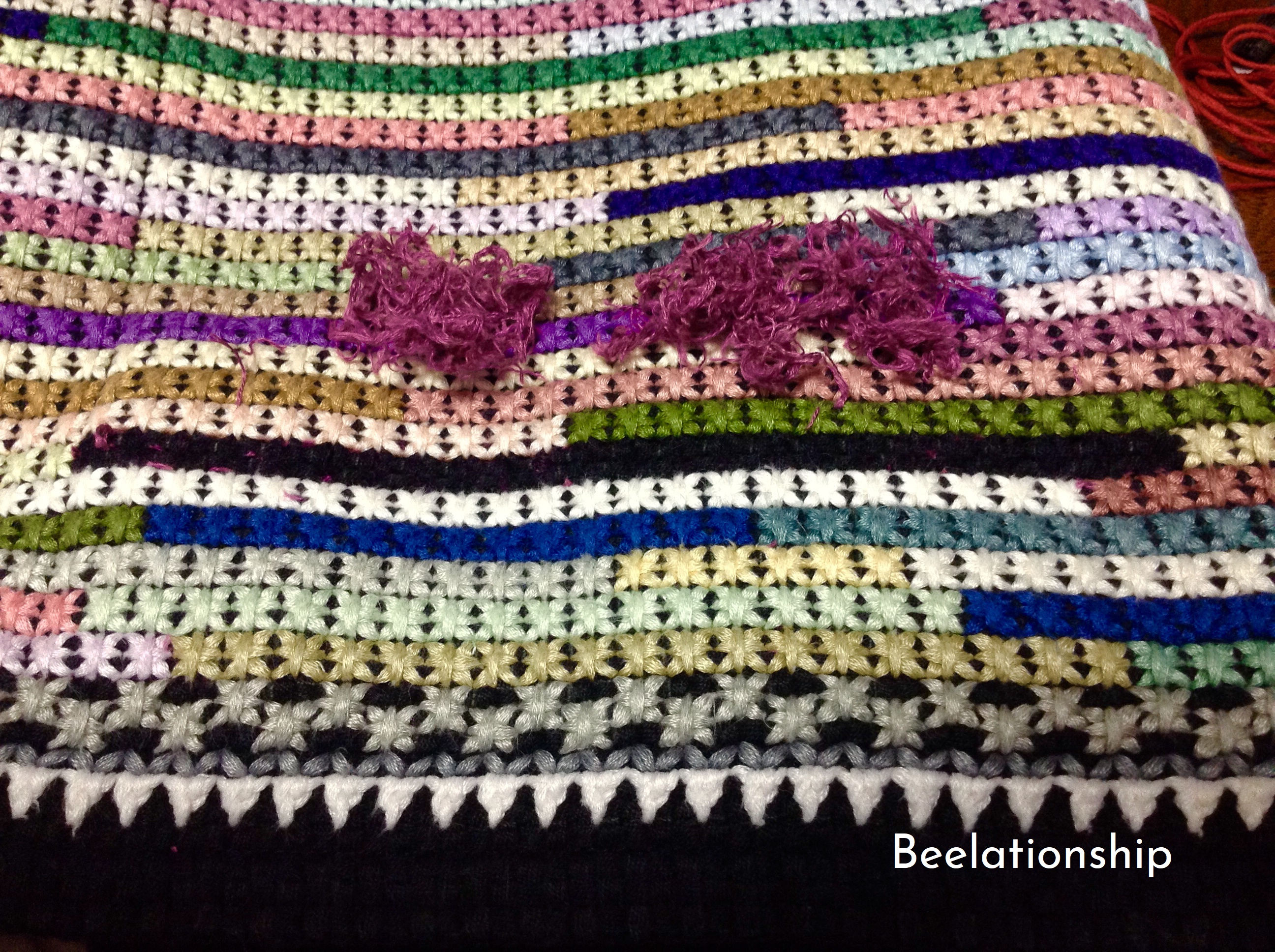 It took thirty minutes to remove all worn-out floss…!

(As you can see the photo above, there was still sweet-potato-colored floss on the mat, but it was intertwined deeply with other floss which had to be remained.
Therefore, the part was going to be covered by new pink or red floss.)

Double cross stitches were made of six strands. which gave fluffy volume of floss to the mat.

A problem was that the mat has already had a lining.

That means a needle could not be put into a tiny hole which was made by a warp and a weft.

A needle had to be passed under two warps or wefts all at once, which was not an ordinary embroidery way because it often made stitches tight.

So she needed to make floss a little bit loose. 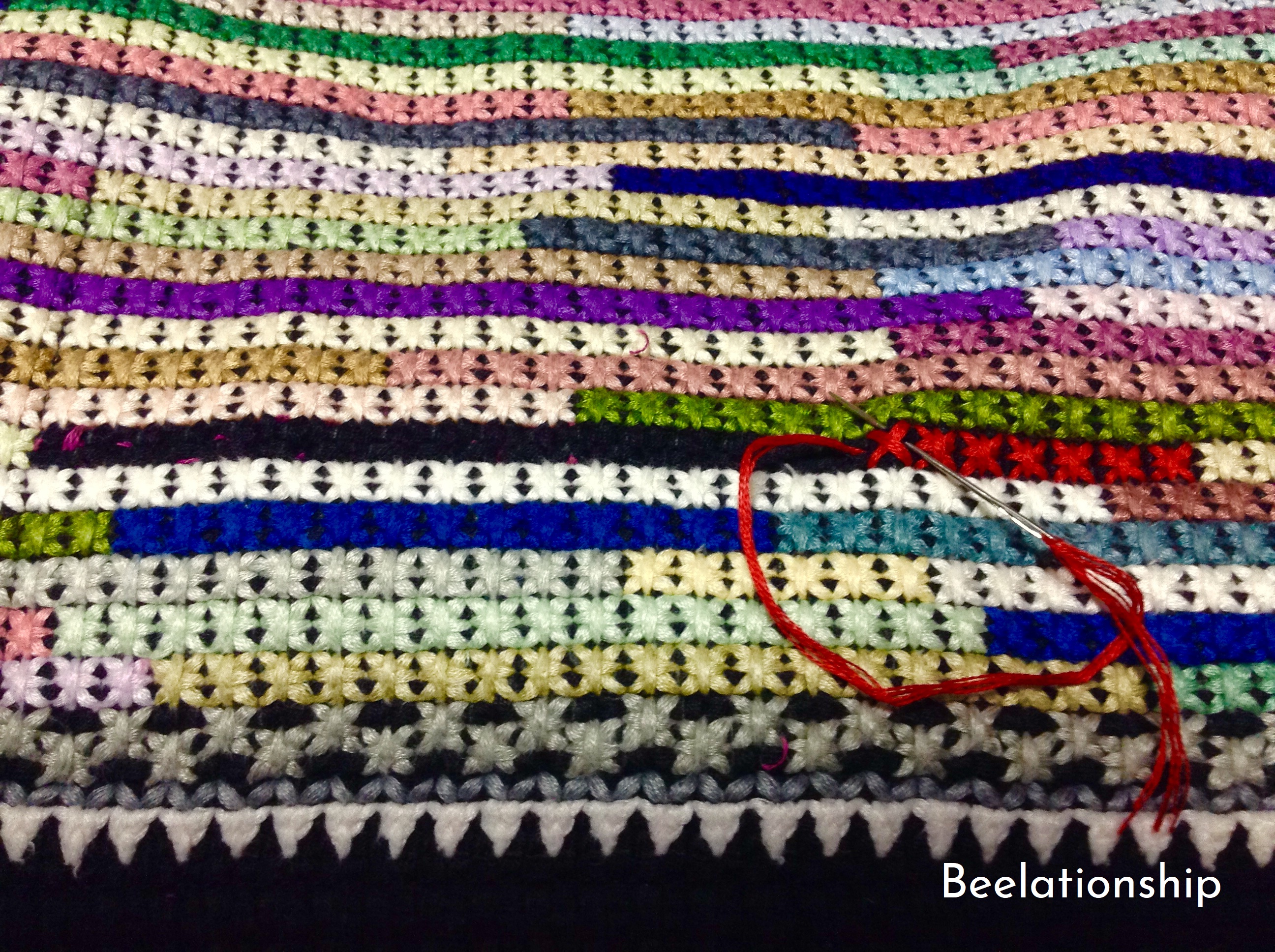 The first repaired part is here.

Red floss was closen to be repaired.

Well, Hachi tried to stitch loosely, yet the double stitches seems to be tight, because black fabric of the part slightly stood out comparing other part…..!

The second part of repair is here. 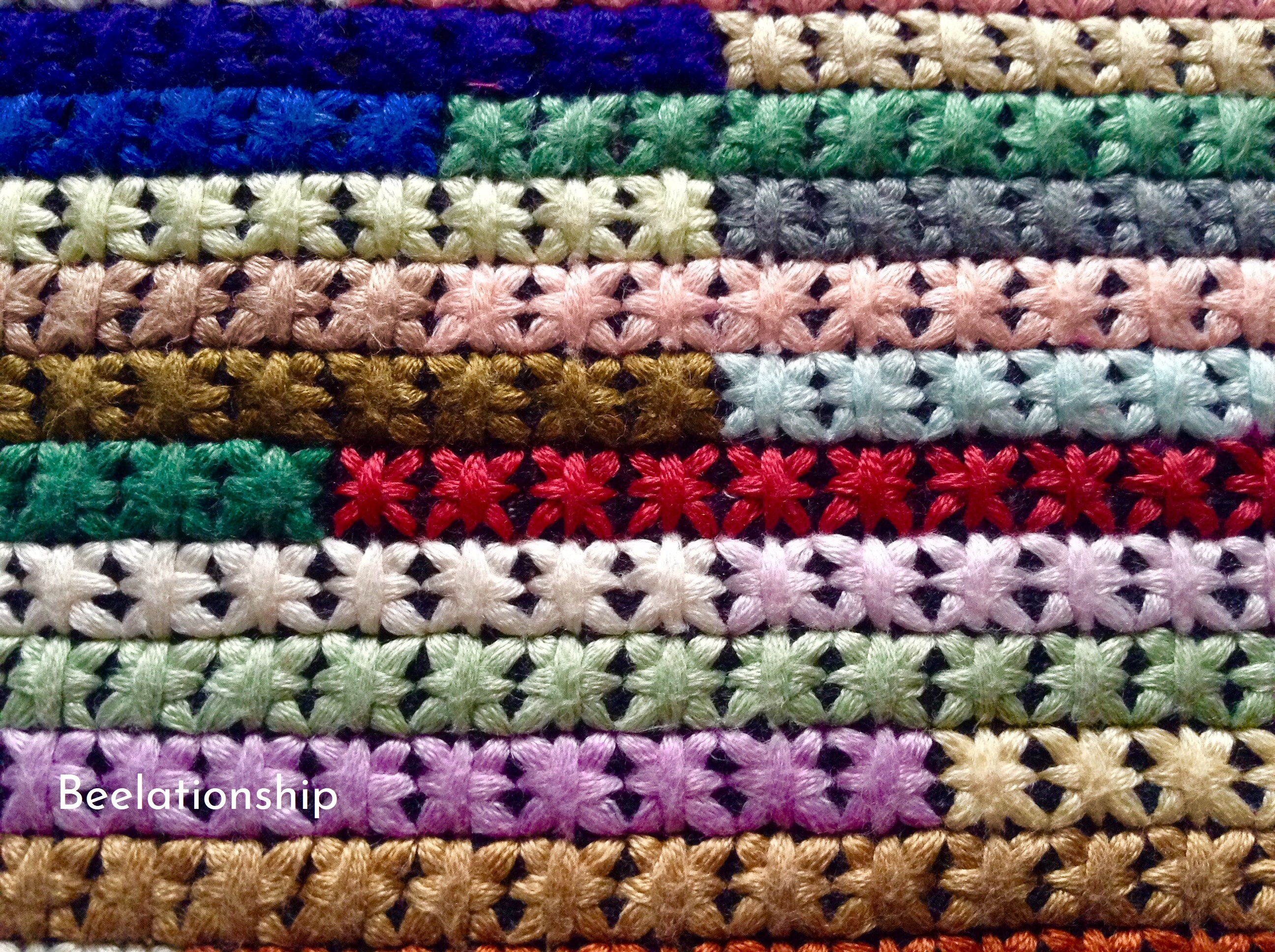 Fluffier than the first repaired part?

Hachi stitched looser than the first part, yet the result was still slightly tight.

She wondered how loose Ito stitched after she repaired the mat.

Here is the overview of the repaired colorful mat being.

Three parts were repaired. Can you see them? 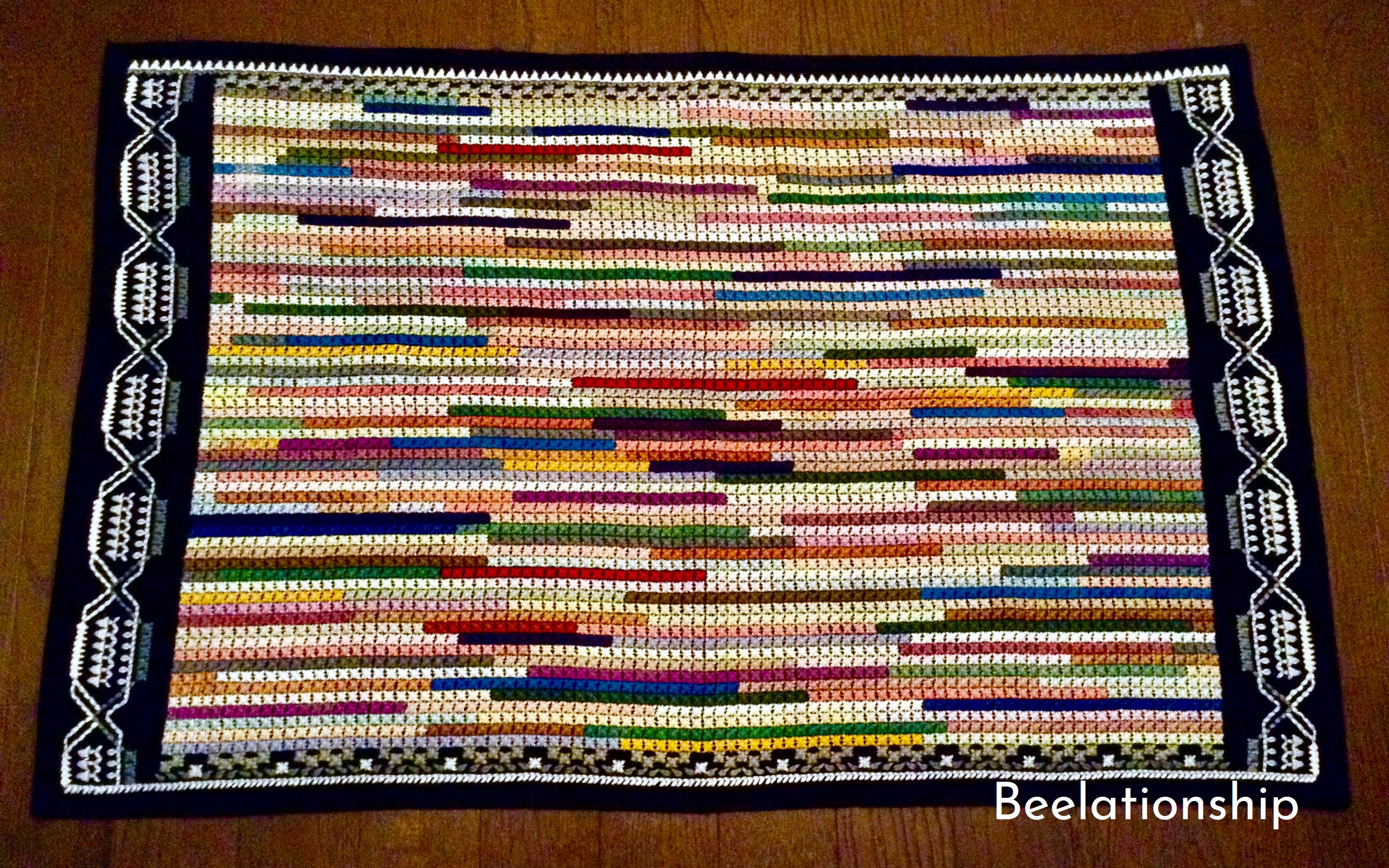 The answers are in the white circles. 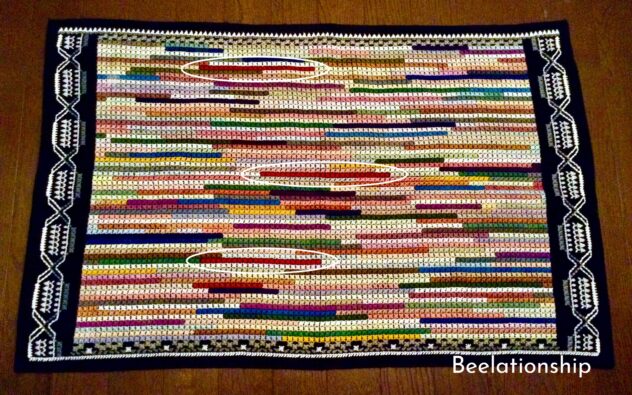 What makes people surprised is that the colorful mat is actually used at the entrance room.

The colorful mat has been faded gradually by the sunlight through the entrance door, and by cleaning and dried it in the shade.

The mat seems to arouse a bland-new passion and radiate fresh atmosphere around it, which makes Hachi’s heart pounding somehow.

What is the colorful mat trying to tell?

It was obvious to happen, yet the colorful mat was absent from the entrance room while it was repaired.

When something is absent, people often think about it.

The colorful mat was made by Ito with her remaining floss.

Now it is used in the place where people often sees it, but it used be in the room where never got sunlight in Ito’s house.

The reason Ito was about to throw Colorful Mat away

Peiji asked Ito why she did that.

Ito answered that she could not recognize the colorful mat as a good work because she stitched it intuitively, just following her sensations.

However, the colorful mat was filled with Ito’s nature (her treasure) to be unfolded.

The colorful mat saved Ito when she was about to give up embroidery.

Then, the mat helped Ito again to let her realize that her favorite element of embroidery was to discover new combinations of colors.

After those experiences, she tried to choose colors by herself for the Patchwork Pattern. 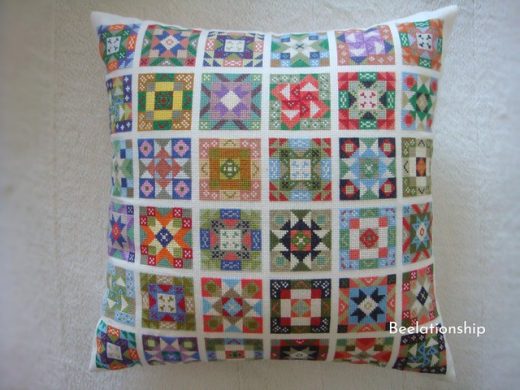 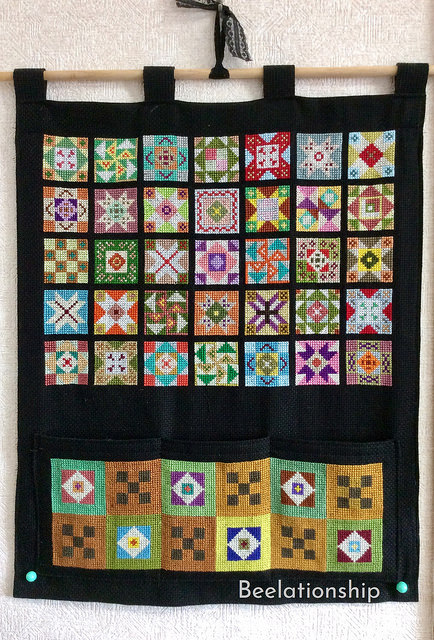 Lately a person happened to share the joy and the beauty in color in response to Ito’s activity.

That encouraged Ito so much, and now she is passionate about embroidery again.

The whole events opened the door of beauty of color for Ito, and to the world.

The most important things are inside you

A person’s nature can be found in a repetitive pattern.

It is often appears in movement or events, which he/she feels worthless or troublesome.

Self-confidence might depend on whether you can realize your own repetitive pattern in your life.

(Hachi would like to write about her days without self-confidence in another article.)

The colorful mat was repaired by vivid red floss, which seems to represent passion.

Perhaps the repaired colorful mat is telling us that we can do better work by believing in ourselves, relating, stimulating each other, and being intertwined.

After repairing the colorful mat, Hachi put it back where it was.

Colorful Mat became like a lamp with warm right, again.

Now it is lying on the floor representing a sense of home and watching people moving around.